When Japan came to Värmland. Japonism and the Rackstad Artists 1880–1920 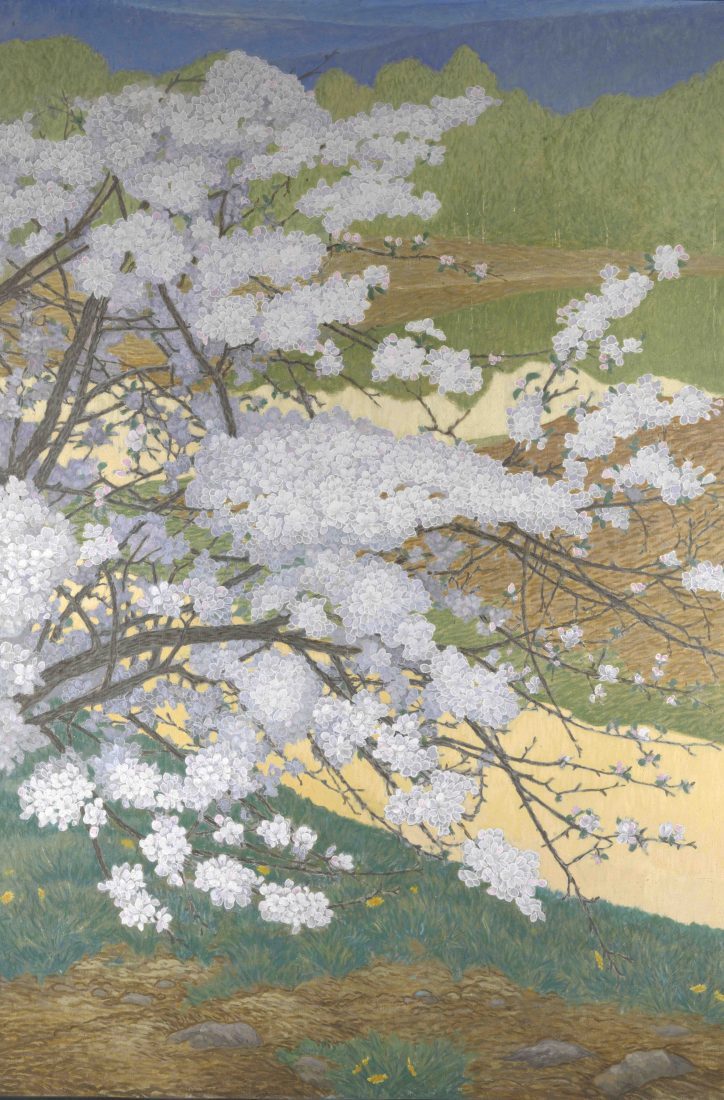 This exhibition is about the Japanese influences on the Swedish fin-de-siècle art scene. It focuses on the Rackstad Group, an artist colony that grew around lake Racken in the Värmland region in Western Sweden, culminating in 1900. Artists and craftspeople mixed disciplines and genres with influences from Swedish, European and Japanese art. Paintings, woodcuts, ceramics, textiles and metalwork by artists such as Gustaf and Maja Fjæstad, Hilma Persson-Hjelm and Bror Lindh are shown here alongside Japanese art. Motifs, perspectives, techniques and materials reveal how profoundly the aesthetics of Swedish national romanticism are indebted to Japan.

With its emphasis on ornamentation, nature and everyday scenes, Japanese aesthetics had a huge influence on European and American taste and style in the late 19th and early 20th centuries. The contours were flowing and irregular, and the decor brimming with flowers, dragons and insects. In 1854, when Japan opened its borders to the world, art and applied arts became crucial in spreading knowledge about the nation. Exhibitions and art journals presented images of woodcuts and crafted objects, inspiring a whole world. The fervent western interest in Japanese aesthetics in the decades around 1900 is called Japonism and was manifested in art, design and popular culture. Japan and Sweden signed a trade agreement in 1868, and contacts intensified in the 1890s.

The exhibition was produced by Värmlands Museum, and is shown at the Thiel Gallery in a modified version as part of the celebration of 150 years of diplomatic relations between Japan and Sweden in 2018.

We are grateful for support from the Märta Christina and Magnus Vahlquist Foundation and the Scandinavia-Japan Sasakawa Foundation.

Disposition of the exhibition

Japonism in Sweden. Artists and collectors

The Swedish artists first encountered Japanese imagery and forms in Paris, where many were deeply impressed. “As an artist, Japan is my native country,” wrote the Swedish painter Carl Larsson in 1919, and influences can also be seen in work by artists such as Bruno Liljefors and Julia Beck. Three of the woodcuts here belonged to Gustaf and Maja Fjæstad and were kept in their home in Värmland. The art patron and former owner of the Thiel Gallery, Ernest Thiel owned four woodcuts by the Japanese artist Utamaro. They were recently rediscovered in the Thiel Gallery’s warehouse and are shown in this room. The other woodcuts belonged to a collector in Värmland with a special interest in prints.

When the first Japanese objects arrived in Europe in the 1860s, parasols, fans and kimonos were frequently used as costumes and props in painted portraits. In the 1890s, the influence increased in paintings, books and crafts. Japanese woodcuts were especially popular. The Japanese term for print is Ukiyo-e, which means “pictures from the floating world”. Motifs from the entertainment district in the city of Edo (Tokyo), were especially appreciated, showing theatre performances, courtesans, sumo wrestlers and geishas, but also everyday scenes and landscapes. Underneath the surface lies a Buddhist melancholic view of life’s transience.  Ukiyo-e flourished in the late 18th century, and the most prominent artists were Ando Hiroshige, Katsushika Hokusai, Torii Kiyonaga and Kitagawa Utamaro.

Japanese crafts objects became popular collectibles during this period. Netsuke are belt buttons, charmingly designed as miniature sculptures. Inro is a portable box for carrying things such as tobacco, but was also an attractive fashion accessory. Tsuba, the guards at the end of the grip of samurai swords, are also wearable works of art, with floral, dragon and marine motifs. Several of the objects in this display were bought in Japan by Swedish collectors around 1900, including the explorer Didrik Bildt and the author and adventurer Elsbeth Funch.

Japanese art was seen as a ground-breaking alternative to traditional Western ideals of beauty. Most people never went to Japan, and many had an exotic and romantic picture of the country. But Japanese aesthetics inspired artists to develop a radical visual approach and thus changed the future of western art fundamentally.

The regeneration of the development of European woodcuts was largely inspired by Japanese colour woodcuts, which gave rise to the art of colour printing, creating new technical conditions and giving a new perspective on woodcuts as an independent art form.

Maja Fjæstad had studied textile art and began working with woodcuts in the 1910s, with a mind to creating affordable quality art. She supported her family in this way. Inspired by the Japanese woodcuts and Chinese watercolours she and her husband Gustaf had seen at the Art and Industry exhibition in Stockholm in 1897, they also bought a few original Japanese prints, shown in the previous room.

There are more than 170 motifs by Maja Fjæstad, where her early designs with palms and orchids are among the finest. They were produced in limited editions and are usually numbered. The ones she printed herself are also signed by her. Woodcuts were preferably made on Japanese paper, washi, thin and durable handmade paper from Japan.  The flat surfaces, bright colours and curved shapes resemble Japanese prints, along with the sincere, almost meditative feeling for nature.

An artist colony grew around lake Racken in Värmland, where art and life merged with aesthetic and social ideals. Friendship, everyday life and the countryside contributed to the creative atmosphere.

The sculptor Christian Eriksson was born in Värmland and spent his summers with his wife Jeanne Tramcourt outside Arvika. They invited Gustaf and Maja Fjæstad, who loved the area and settled there in 1898. Over the ensuing years, they were joined by the artist Björn Ahlgrensson and his wife Elsa, and Fritz Lindström with his family. Other artists followed, including Bror Lindh, and the colony had its heyday between 1909 and 1920. In the summers, visitors such as Ellen Key and Richard Bergh arrived, along with various actors and writers.

It was not unusual for artists to move from the cities at this time, driven by a longing for a more authentic lifestyle and virgin landscapes that could be transformed into art. The artists in Rackstad never formulated a collective artistic intention. But they helped one another and exhibited together on a couple of occasions. Some common features can be seen in their art, such as landscape painting with decorative effects and interiors in warm colours.

Gustaf Fjaestad brought his knowledge of Japanese art to Rackstad, having studied for Carl Larsson and Bruno Liljefors, the two most prominent exponents of the Japanese current in Swedish art life. The influence is seen in the asymmetrical compositions and emphasis on surface – the landscapes often appear to have no depth. Bror Lindh’s paintings of blossoming cherry trees and a lush wild rose bush combine Nordic and Asian influences in an entirely unique way.

Artistic design in everyday life. Arts and crafts in Rackstad

Making no distinction between fine art and crafts was regarded as being typical of Japanese art, where even the most mundane objects were given an artistic design. These ideas were combined with a social awareness of creating more beautiful everyday objects for all. Japanese aesthetics were essential to Art Nouveau, a style that was called Jugend in Sweden – German for youth. Maja Fjæstad worked with textiles, painting and woodcuts. Gustaf Fjæstad painted oils alongside designing furniture and textiles, while Bror Sahlström alternated between metalwork and sculpture.

The Eriksson brothers’ furniture workshop was a central meeting place by lake Racken, where artistic principles were integrated in furniture production thanks to one of the brothers, the sculptor Christian Eriksson. The architect Carl Westman designed furniture that was made there, including the large cabinet and elegant chair in this room. The artistic metalworker “Petter på Myra” teamed up with the cabinet makers and made metal mountings for all the furniture, adding to their unique character. Both “Koppar-Lisa” Morell and Olga Lanner studied at his forge.

The textile mill Fjæstads Väveri in Arvika was founded by Maja and Gustaf Fjæstad in 1901. They were commissioned for tapestries, carpets and other textiles, not least for the Thiel Gallery. Among the many weavers working there were Gustaf’s sisters, Amalia and Anna Fjæstad. Gustaf designed the cartoons, Maja was the production manager, and the sisters did the weaving. The ceramicist Hilma Persson-Hjelm owned a Japanese pattern book with family seals, kamon. Ginko leaves, flowers and dragonflies from its pages feature in her output. The ceramicist Riborg Böving experimented with glazes and ornamental patterns.

The Japanese influences are revealed in their interdisciplinary approach to different materials, but also in their design of utility objects, incorporating plants, clouds, insects and runny glazes in the lively decor.

Gustaf Fjæstad has been called “the frost master” and is best known for his winter scenes with snow drifts, powdered fir trees and icy lakes. The perspective is often dizzying, diving steeply into babbling brooks or in among the undergrowth. With his first camera from 1903, the artist took pictures of apparently “empty” scenes: weeds, snow, ice, stones, water and branches. He wanted close-ups to study the movement and structure of materials.

His impressions from the Värmland forests were transformed into paintings, but also into textiles and furniture that brought nature into the most elegant fin-de-siècle parlours. The sculpted stabbe chairs are a mixture of Norse tradition, Jugend and Japonism. The shape is based on a hollowed-out root stump, the decor consists of stylised imagery from nature. More furniture can be seen upstairs in the Museum, especially the 8.5 metre site-specific couch.

This art also had a deeper significance. Gustaf, Maja, Amalia and Anna Fjæstad were interested in philosophies of life and spirituality, and were active in the theosophical movement for many years. Theosophy was popular at the time, as an alternative to the Christian church, and had links to many religions and teachings, especially from the East. One central idea is that the universal macrocosm is linked to the inner human microcosm and the smallest elements in nature. The organic patterns that fill these textiles, paintings and woodcuts can be seen as a taste of the spiritual, “vibrating” force that lies beyond the decorative surface.