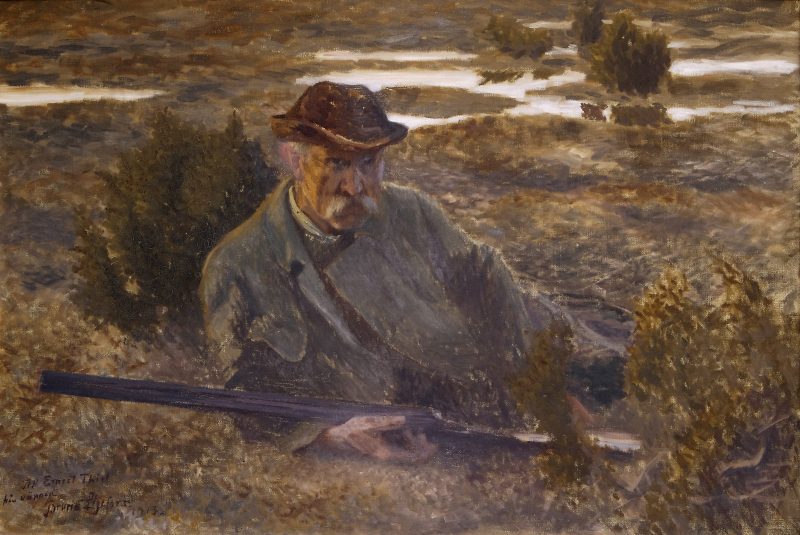 Nature is in focus at the Thiel Gallery during fall and winter! The landscape paintings that Ernest Thiel added to the collection in the Gallery, by for example Bruno Liljefors and Gustaf Fjæstad, are shown together with photographs and moving images of Thiel himself in the forest or countryside. Three contemporary artists, Corinne Ericson, AKAY and Ernst Billgren, have contributed works in the exhibition rooms and out in the park, to demonstrate that the double standards from the previous turn of the century still exist, albeit in a different way.

In the years around 1900, national romantic art, with its moods and atmospheres, existed alongside industrialism’s utilitarian approach to the countryside. Sustainability and climate issues are perceived to be increasingly urgent in our own time, but this duality lingers, since nature still serves as a place for contemplation, inspiration and rest, but also as a resource to utilise and exploit.

The art collector and venture capitalist Ernest Thiel operated in the intersection between these two world views. On the one hand, shooting was a favourite pastime, and he prospered from his dealings with the mines in the north. On the other, he filled his home with suggestive and scenic paintings from different parts of Sweden.

The Thielska Gallery has a large collection of paintings by Bruno Liljefors, one of Ernest Thiel’s closest friends. “His paintings revealed to me the uniqueness of the Swedish countryside,” Thiel writes, showing that the way he saw forests, lakes and mountains was informed by art. A unique amateur footage from 1930 shows Thiel on Fjärdlång, his private island in the Stockholm archipelago, in connection with a game shoot. The film shows the social mechanisms of the shoot, especially among men.

Corinne Ericson has photographed the hundreds of elk hides she has encountered in the forests of Jämtland between 2002 and 2013. The photos invite the viewer to discover the hunter’s position and to scrutinise it from the outside.

Particular attention is accorded to a ramble for industrialists and members of parliament, from Narvik via Kiruna to Gällivare organised by Thiel and his friends, including the banker Knut Wallenberg, in the summer of 1896, to muster more investment. Wallenberg took photographs that are exclusively on display in the exhibition. Rarely shown paintings by the artist brothers Elis Åslund and Helmer Osslund have been brought up form the museum archives. Thiel’s strong impressions from the rugged countryside and his own financial interests in the landscape probably influenced his choice of these particular works.

National romanticism established a strong tradition of nature painting in Sweden; this has become part of Sweden’s popular imagery. Since the 1980s, Ernst Billgren’s oeuvre has demonstrated that this is a genre that is especially useful when challenging notions of “good” and “bad” art. He also reverses the perspective: throughout the ages, people have used nature for their own purposes, but what would happen if animals stepped into the highbrow parlours?

AKAY’s artistic starting point is the public space. In the past year, he has exchanged the city for the wilderness, painting existing northern Swedish shooting towers in bright colours. The tower AKAY has erected in the Thielska Gallery park, which can be seen through the window, is a reminder that Djurgården used to be royal hunting grounds. The installation around Auguste Rodin’s sculpture The Shadow causes an unexpected collision between how the hunter and the artist see the surrounding landscape.