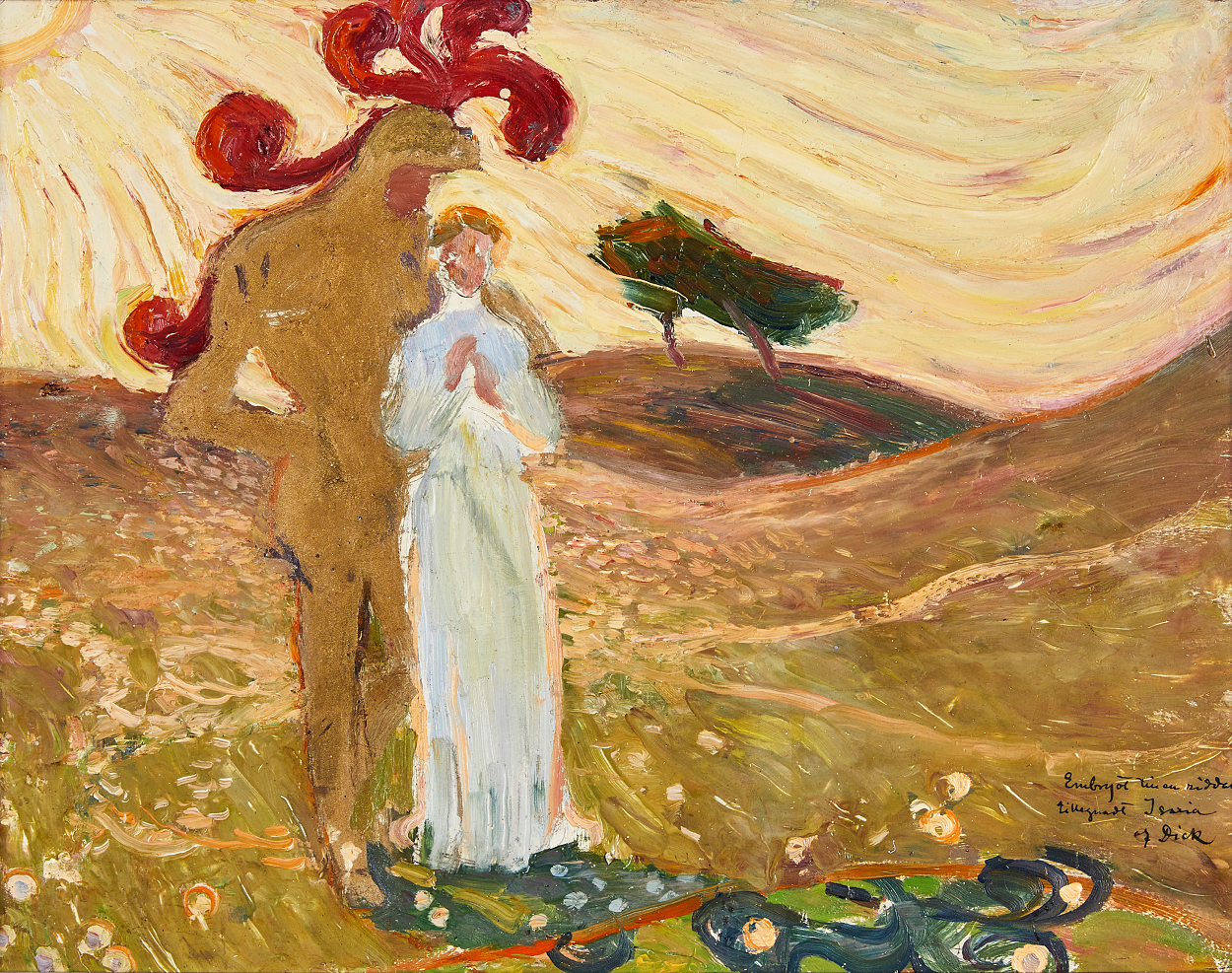 Richard Bergh, Study for The Knight and the Maiden, ca 1897, oil on panel

The Thiel Gallery has received a donation of one of the first studies Richard Bergh made for his national romantic painting The Knight and the Maiden from 1897, one of the most important works in the Thiel collection – and in Swedish art history. It gives us an insight into the artist’s long and arduous creative process leading to the finished painting.

This lively study in oil on panel is signed with a dedication: “The embryo of a knight, dedicated to Isaria by Dick.” The singer Isaria (born Boklund) was married to the artist Oscar Björck, and the couple belonged to the same circle as “Dick”, as Richard Bergh was called by his friends, and the art patron Ernest Thiel.

This picture is bathed in sunlight, whereas the finished painting is a landscape at dusk. The brushwork is more energetic in the sketch, but the composition is the same as in the final work. In the foreground, a knight in gilt armour puts his hand on the shoulder of a young girl in a long, white gown, who holds a dandelion gone to seed – an ambiguous symbol of life and mortality, death and rebirth.

Richard Bergh (1858-1919) was preoccupied with the theme of the knight and the maiden throughout the 1890s. Mediaeval fantasies were in fashion, but he was particularly captivated by the fields of dandelion seed-heads he had seen on Gotland, Sweden’s largest island. In twilight, these pastures turned to a powdery pinkish red. The Thiel Gallery collection has several graphite sketches, notes and oil studies for The Knight and the Maiden, but none of these show the entire scene.

“We are delighted to add this historically important sketch to our collection, and are deeply grateful to the art collectors Susan and David Werner from Pennsylvania, USA, for enabling us, together with the Friends of the Thiel Gallery, to make this acquisition,” says Åsa Cavalli-Björkman, Director of the Thiel Gallery. “Richard Bergh’s study has found its place next to the painting The Knight and the Maiden in the Dining Room on the first floor of the Gallery. It feels like it has finally come home.”

Susan and David Werner have collected Swedish art for more than twenty years. On their first visit to the Thiel Gallery, they were impressed by the quality of the collection and how it interacted with the fin-de siècle setting. This donation of the study for The Knight and the Maiden is their way of thanking the Gallery for being a constant source of inspiration.