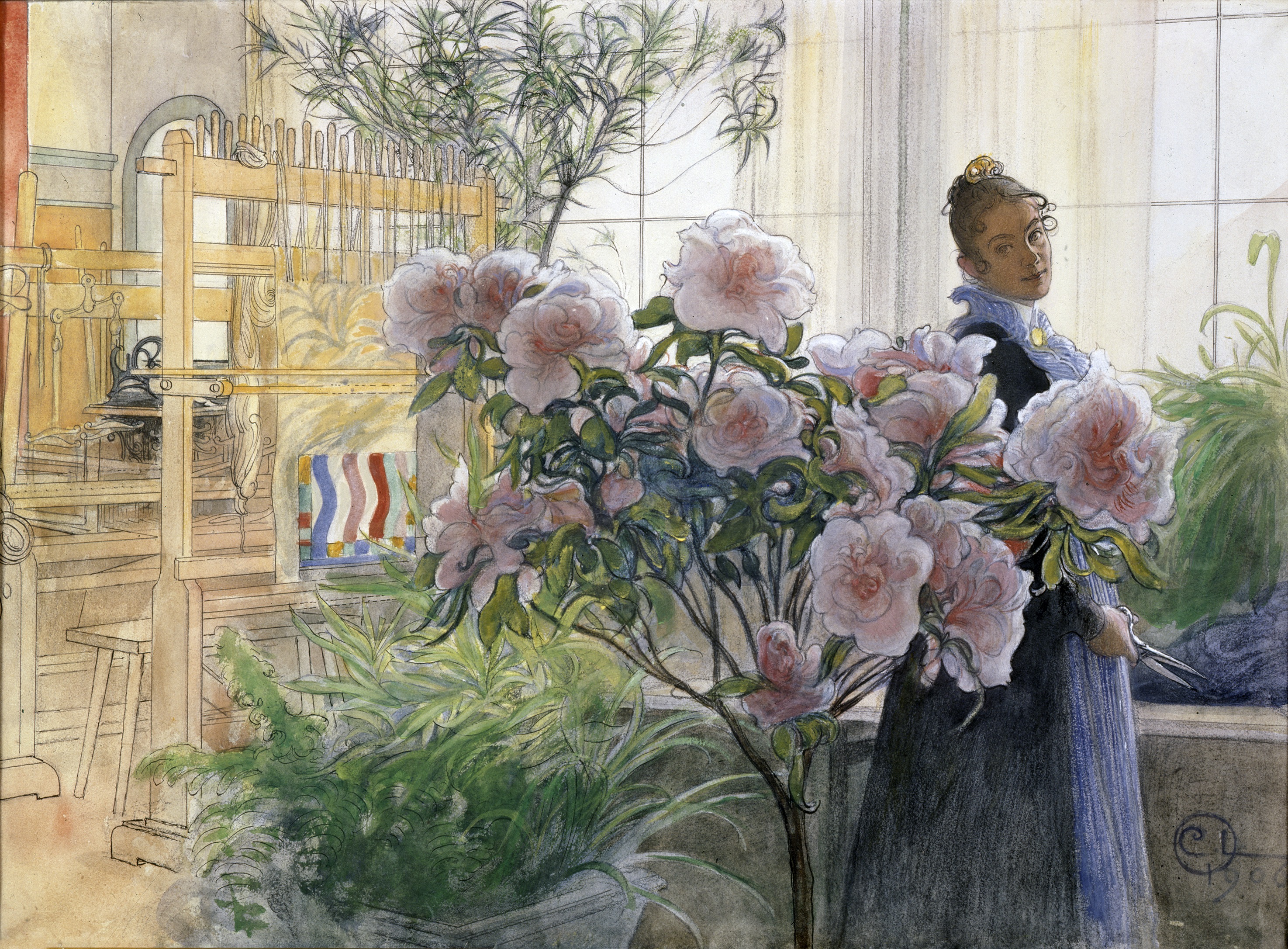 There is a room at the Thiel Gallery in Stockholm whose walls are filled with the art of Carl Larsson. The watercolours show the home that Carl and his wife Karin created in Sundborn in the Swedish province of Dalecarlia. Karin Larsson has been captured in mid-movement in the painting Azalea, (1906); the pink potted plant dominates the foreground. The loom in the background displays her artistic work with a fabric in a brightly coloured abstract pattern. A short period of rest or an interrupted conversation is presented as a drama in the painting Mor och dotter (Mother and Daughter, 1903), with the wall panel behind the figures serving as a backdrop. The darkness of evening creates a sense of atmosphere in paintings such as Kring aftonlampan (Around the Lamp, 1900) and God natt (Good Night, 1894), in which the family dinner table and the ritual of going to bed have become artistic motifs. Domesticity was combined with the artistic life throughout both day and night and everyone who spent time in the home was depicted: guests, family members and the artist’s models. The nude model has taken a break from work and is seated at a table in the studio to write a postcard – the work she posed for is on an easel beside her. The entirety of life in the home was Carl Larsson’s workplace – not just the studio, but every room in the house.

The way the home was seen in Scandinavia would change around the turn of the twentieth century due in large part to the Swedish philosopher Ellen Key.[1] Instead of the domestic world being shaped by the expectations of bourgeois society, family life and the home were to serve as a model for social development. Carl Larsson’s pictures portrayed the idea of a home that bore the stamp of individual taste along with a bustling family life that would also provide a stimulus for creativity.

The Thiel Gallery was built at the early 1900s with space both for an art collection and a family. Together with his second wife Signe, the banker Ernest Thiel began collecting art and socialising with artists during the 1890s. Thiel was an extremely successful financier operating at the height of the golden age of the industrialisation of Sweden. He made his fortune by investing in areas such as the mining of ore in northern Sweden and the metalworking industry. The gallery building was designed by the architect Ferdinand Boberg, and Thiel filled it with Swedish and Nordic art.

Thiel was interested in the contemporary art of his own time and through his acquisitions took a deliberate stand against the established art world in turn-of-the-century Sweden. He allied himself to Konstnärsförbundet, an association of artists that was formed in 1886 in opposition to institutions such as the Swedish Royal Academy of Art and the Nationalmuseum in Stockholm. The artists that Thiel supported, such as Richard Bergh, Eugène Jansson, Carl Larsson, Anders Zorn, Bruno Liljefors were all seen as radical and were active members of the opposition movement.

The primary aim of the support Thiel provided was to make it possible for artists to work undisturbed and he summarised his attitude thus: “My aim has not been to acquire a work of art; my sole intention has been to pave the way for another person”.[2]This meant that he was not concerned with selecting individual “masterpieces” but strove instead to support the creation of an artist’s entire oeuvre.

Although Carl Larsson and Ernest Thiel had known one another since the end of the 1880s, contacts between them became much closer when Thiel commissioned a portrait of his wife Signe in 1900. A total of 25 art works by Larsson were acquired for the collection at the Thiel Gallery – oil paintings, watercolours, charcoal drawings and prints. Thiel was fascinated by the decorative effect in Larsson’s pictures and by his ability to give us a glimpse through his art of the utterly mysterious world of the imagination. In a letter to the artist he would describe his fascination thus: “you are complicated and enigmatic. I love your art which gives me nuts to crack…”[3]. Thiel considered it essential to acquire a large selection of the artist’s “aristocratic, elegant, noble art”[4]and thought that Carl Larsson was one of the most important artists in his collection.

Alongside their professional relationship, a real friendship would develop between Carl and Karin Larsson and Ernest and Signe Thiel. They corresponded frequently and visited one another’s homes. When artists and writers gathered at the Thiel Gallery in Stockholm to play cards, Carl Larsson was one of the regulars. Visitors who spent the night in the guest room at Sundborn would have their names written on one of the doors of the bedside cabinet. The names of Ernest, Signe and their son Tage are listed there among all the artists and writers.

Even while the construction of the Thiel Gallery was still in the planning stage, Ernest and Signe wanted their friendship with the artist to be clearly manifested in the building: “...you must erect a lasting monument in our home. You should be entirely and genuinely present in that home which is not only entirely at your disposal but also houses two beings that love and understand your art.”[5]A mural in one of the large rooms or a roof cupola with frescoes were discussed but sadly none of these ideas was ever carried out. Carl Larsson did, however, paint portraits of Ernest, his wife Signe and their two children Tage and Inga-Maria. And the room at the Thiel Gallery in which these paintings hang also calls to mind the decorative arts as practised by Carl and Karin Larsson.  Furniture in pale birch from the early nineteenth century has been combined with decorative patterns on the ceiling in the art nouveau style. The huge windows let in a great deal of light through thin curtains and a flower table with several shelves ensures plenty of space for potted plants.

In their different ways Ernest Thiel and Carl Larsson were profoundly interested in the encounter between art and everyday life. Larsson made every aspect of domestic life part of his art, while Thiel constructed an art gallery that was also a home. At the very onset of the twentieth century their visions of the changing significance of the home and the radical power of art would inspire and stimulate one another and would shape the way later generations see Swedish art and style.

Text: Patrik Steorn, Director of the Thiel Gallery Art Museum, Reader in the History of Art 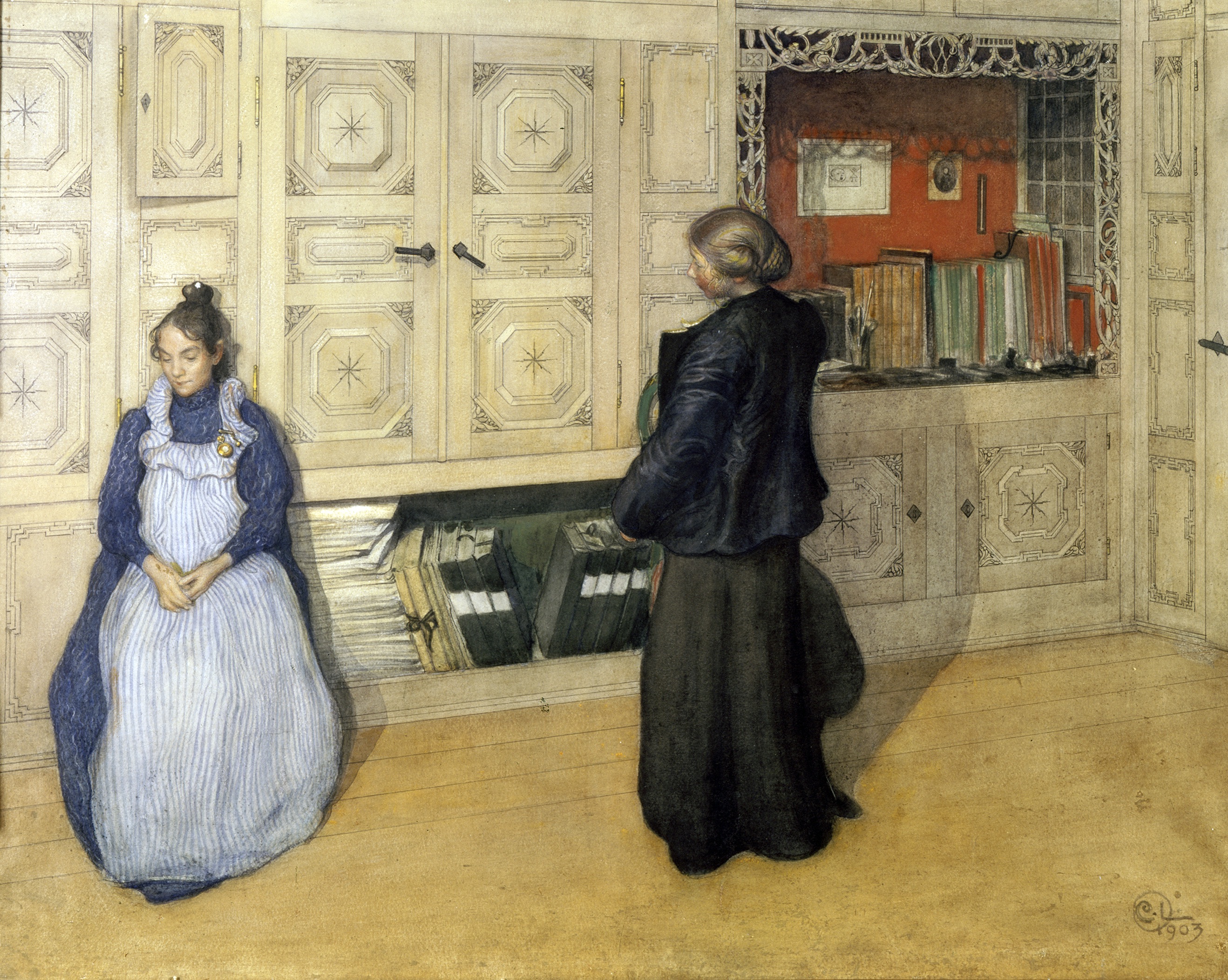 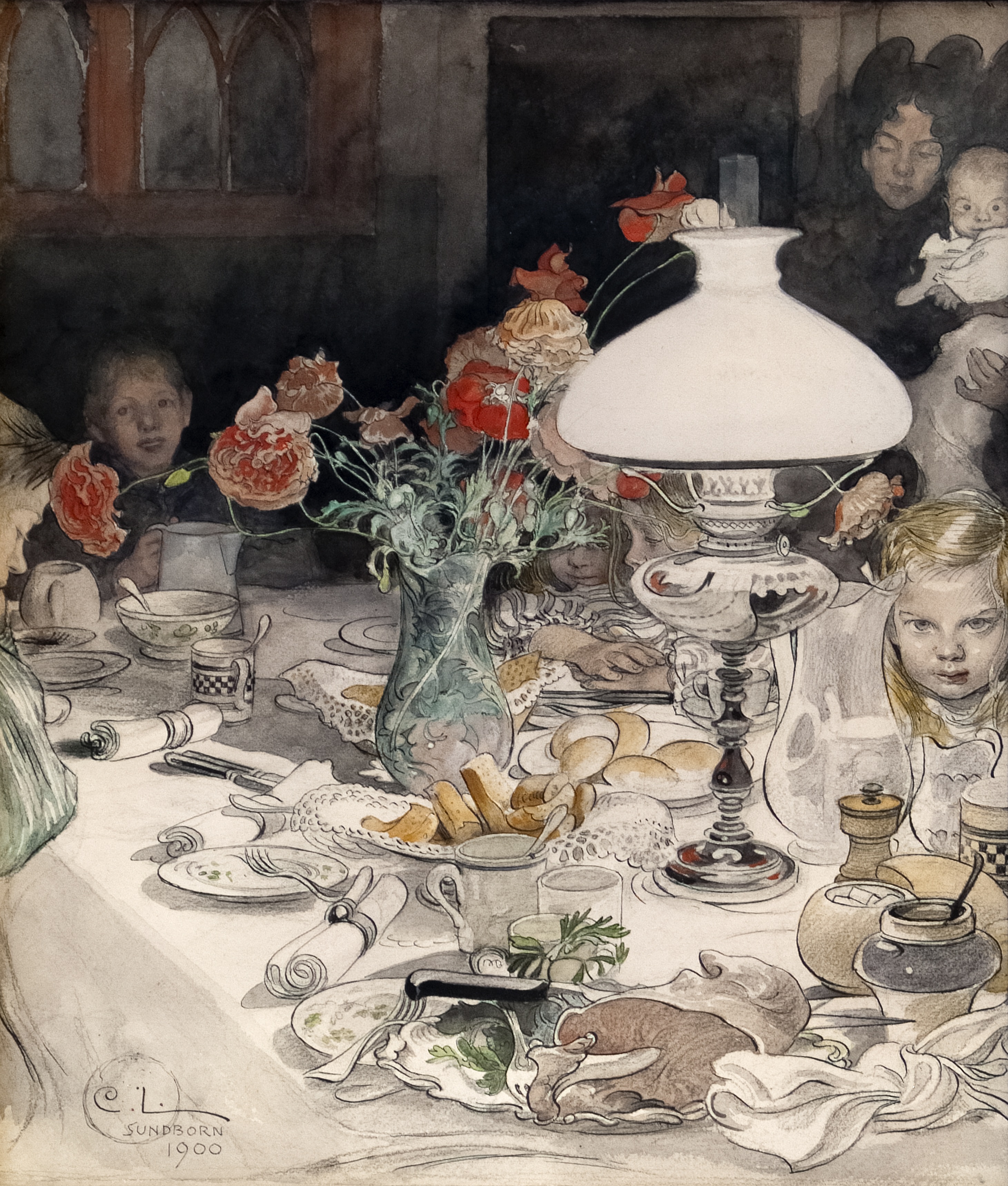 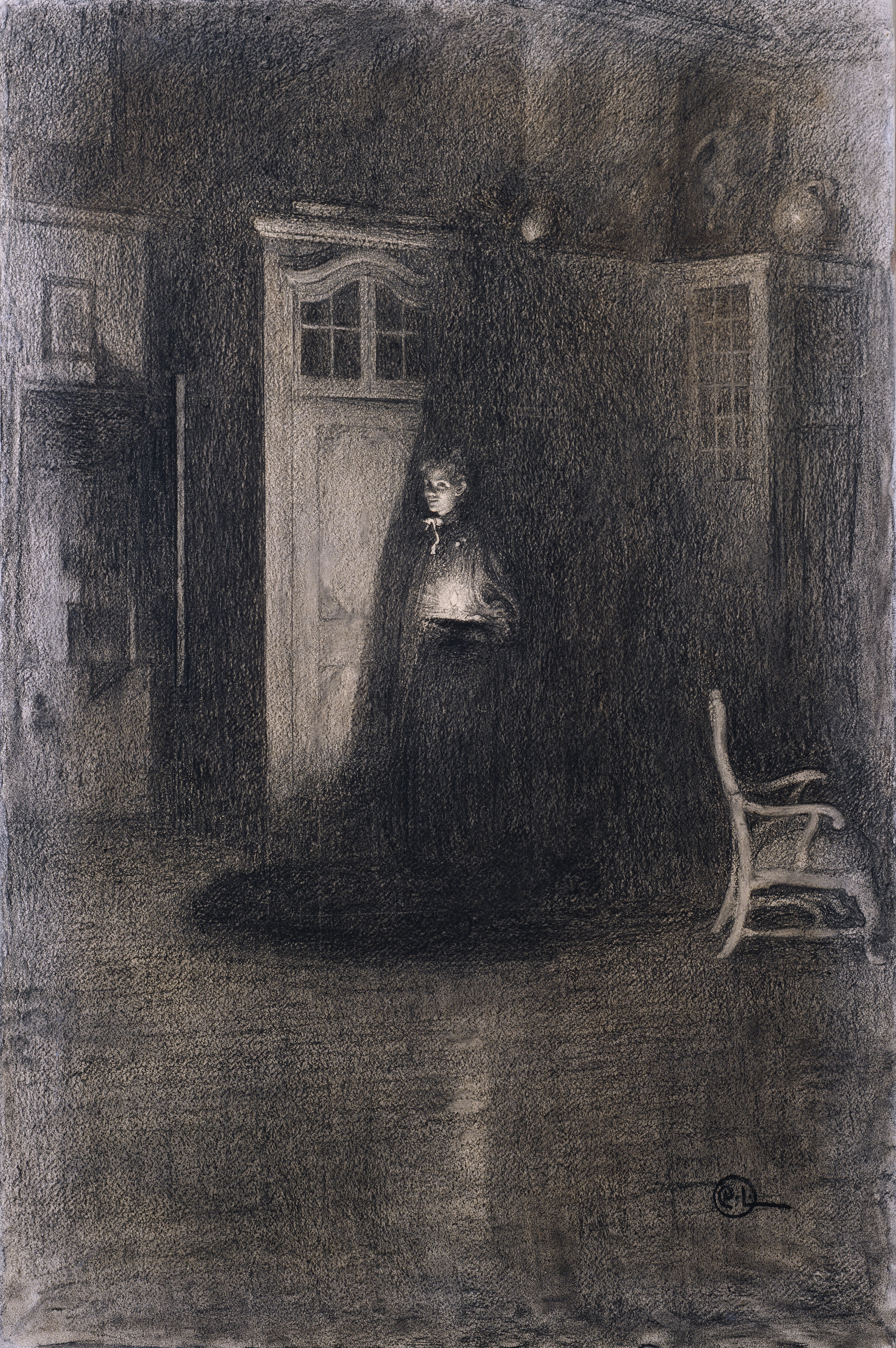 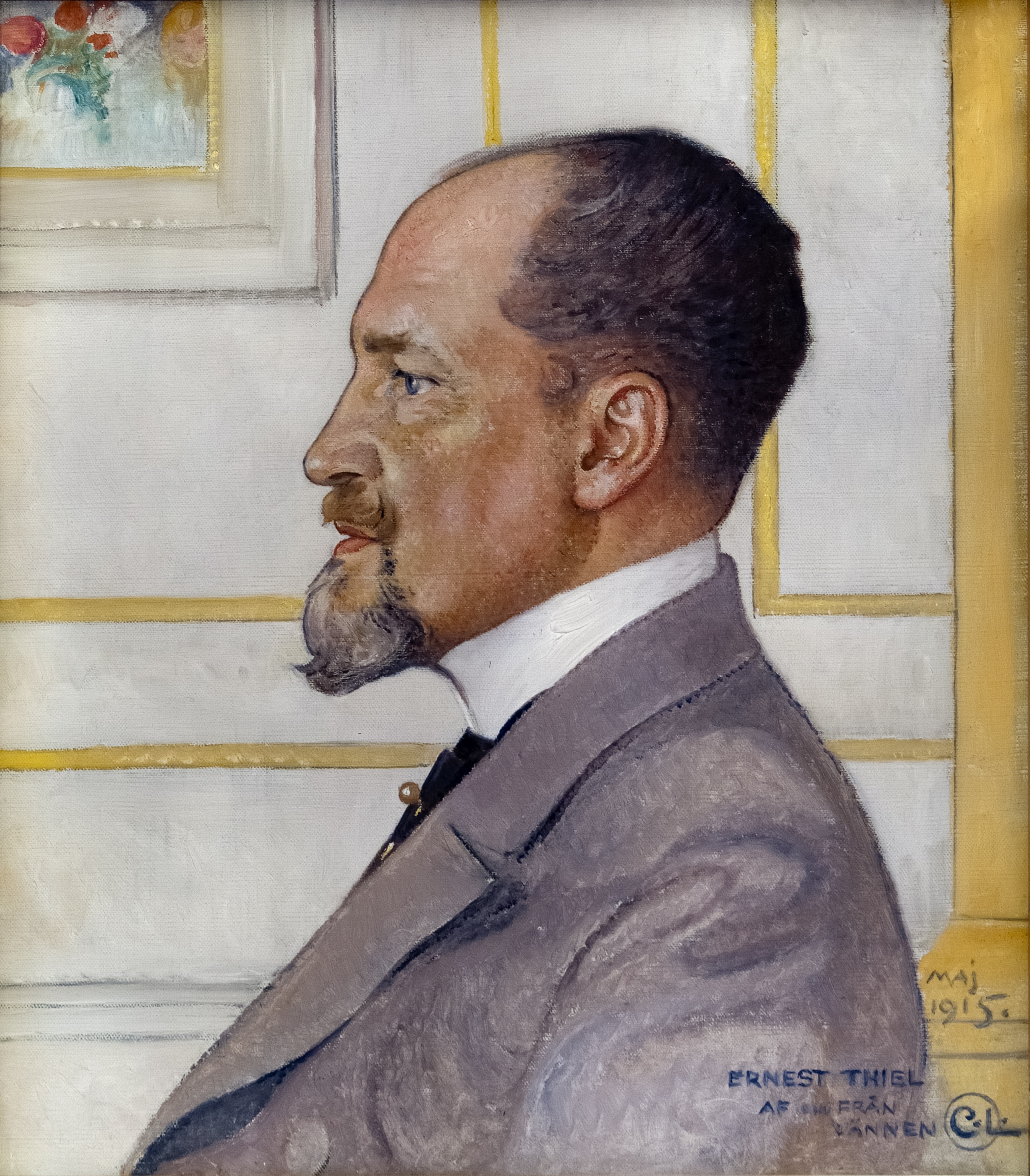 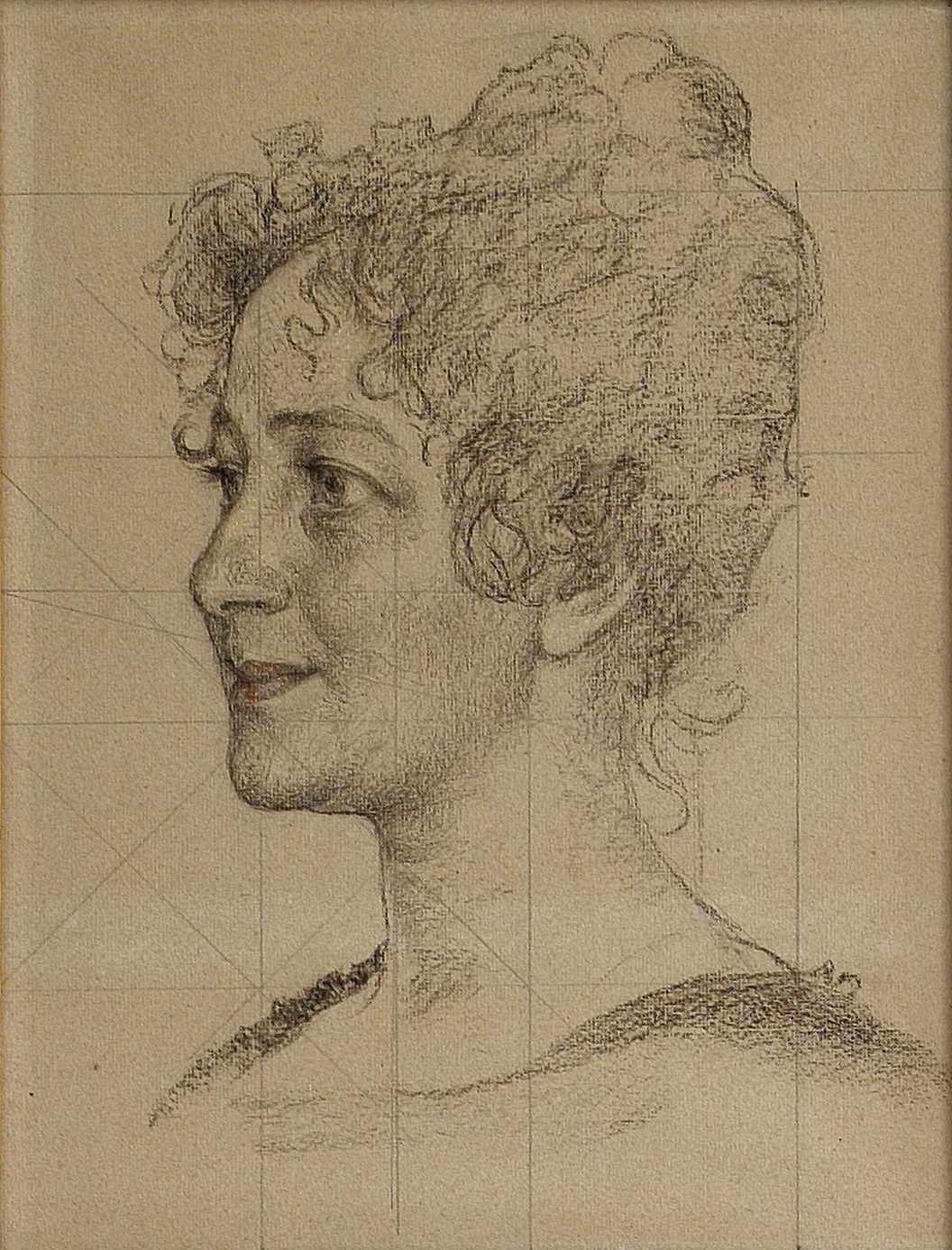 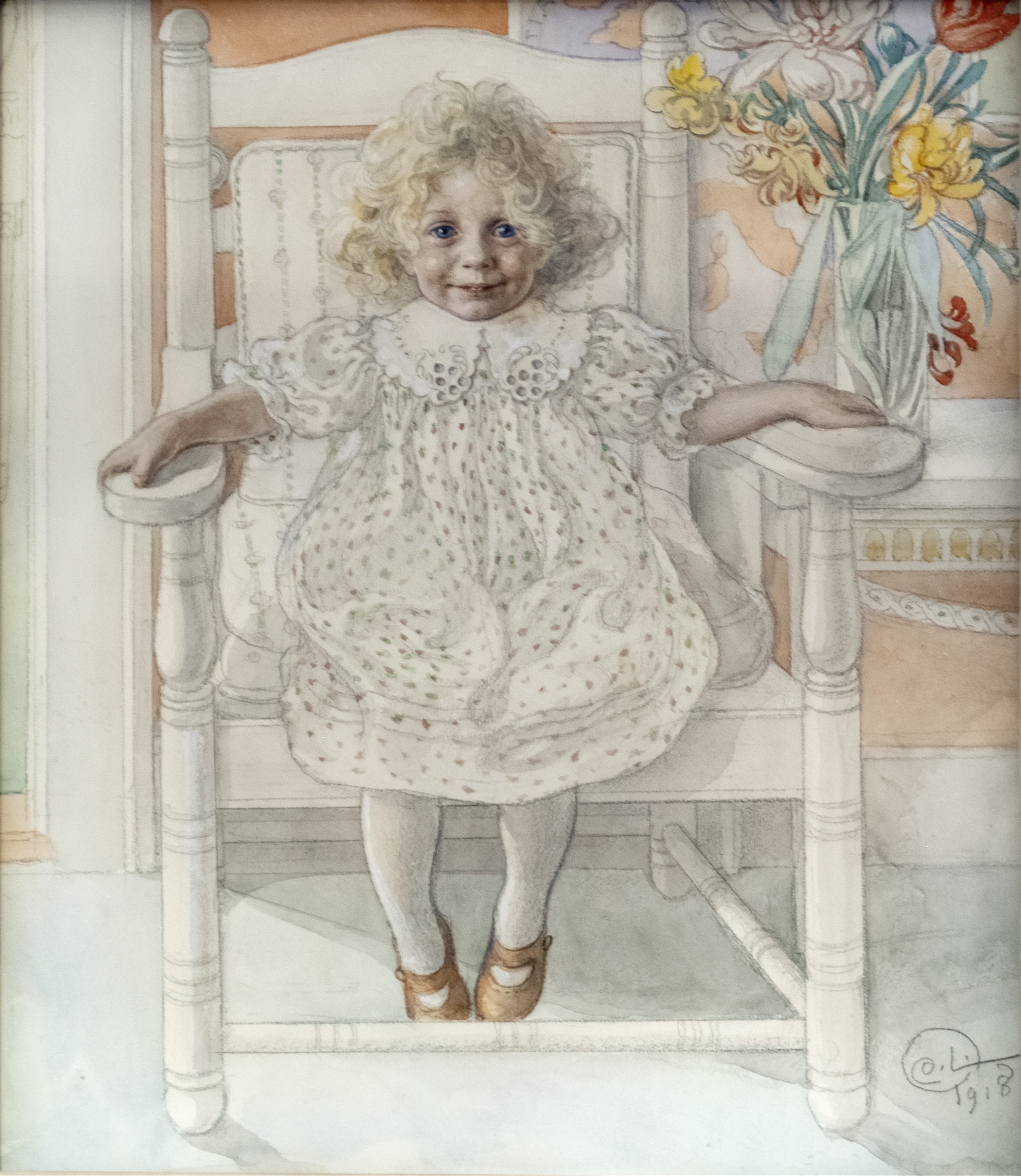 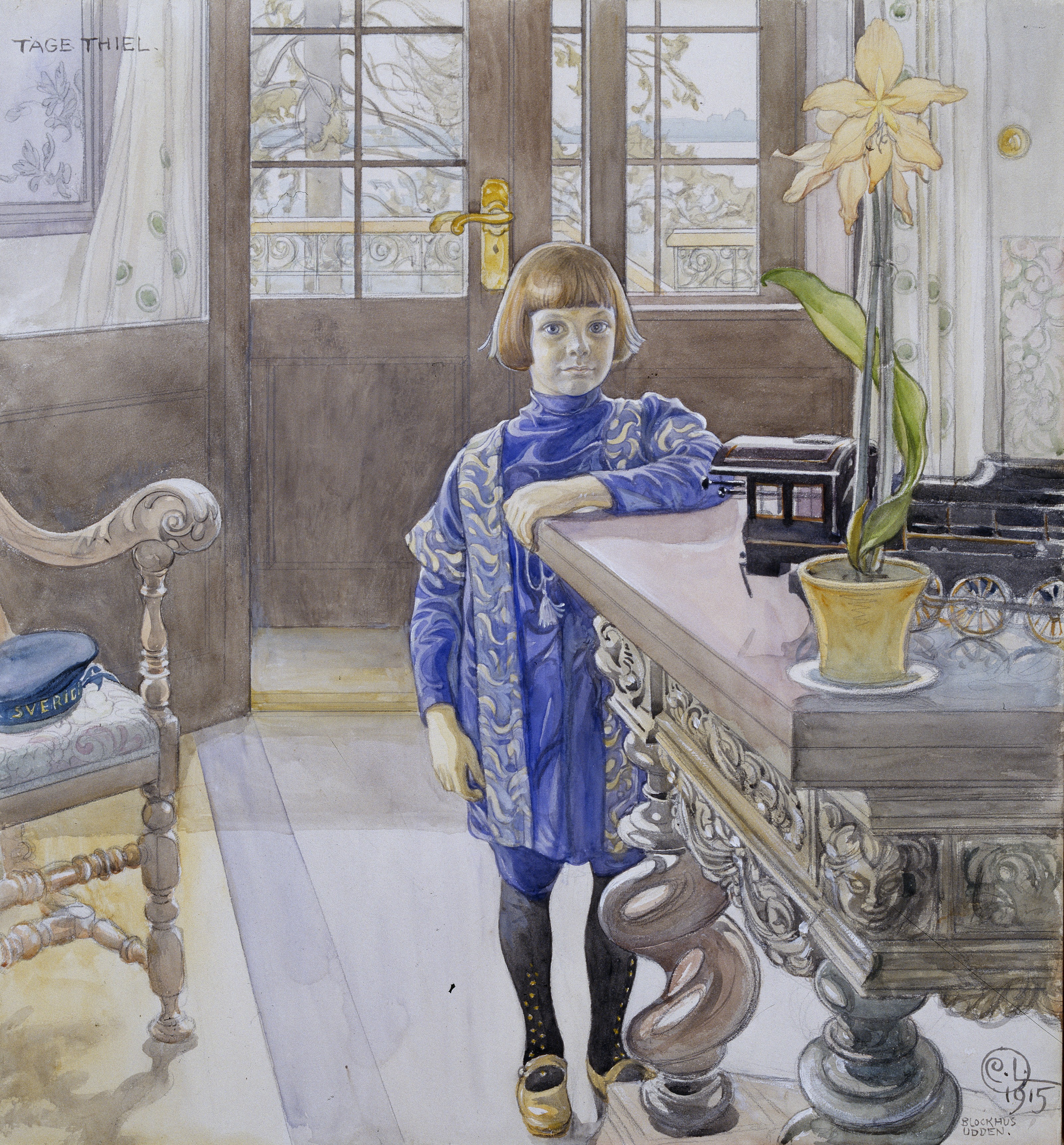